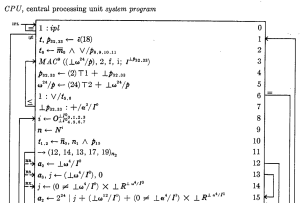 A fragment of the description of System/360

A mathematical notation for manipulating arrays was developed by Kenneth E. Iverson, starting in 1957 at Harvard University. In 1960, he began work for IBM where he developed this notation with Adin Falkoff and published it in his book A Programming Language in 1962. The preface states its premise:

"Applied mathematics is largely concerned with the design and analysis of explicit procedures for calculating the exact or approximate values of various functions. Such explicit procedures are called algorithms or programs. Because an effective notation for the description of programs exhibits considerable syntactic structure, it is called a programming language."

This notation was used inside IBM for short research reports on computer systems, such as the Burroughs B5000 and its stack mechanism when stack machines versus register machines were being evaluated by IBM for upcoming computers. It was also used to design and describe the new IBM/360. Iverson also used his notation in a draft of the chapter A Programming Language, written for a book he was writing with Fred Brooks, Automatic Data Processing, which would be published in 1963. Based on this, Larry Breed and Phil Abrams implemented the first interpreter, and it eventually was named A.P.L., acronymising the title from the book.

In 1979, Iverson received the Turing Award for his work on APL.