Glee is a J-inspired left-to-right evaluated ASCII array language which is "targeted at applications where languages like PERL, Python, and Java have found secure homes." It has a focus on programming features which are generally uncommon in array languages, allowing variable references, complex scoping, built-in stream and socket support, pre-made container objects, fields and many others.

Glee has not been updated since 2004. No activity has been logged on the main site since that year.

Glee is designed as a more convenient APL-style language in the creator's eyes:

Glee is my-own, and to me, my-better APL. It keeps the features I enjoyed in APL and removes the warts. It supplies features I always wished APL had.

In that vein of thought, it completely abandons many tools supported in modern APL implementations.

Pretty-printing is not done on values by default. Higher depth arrays can be inspected using the %** operator.

Glee comes packaged with a GUI-based IDE with some debugging capability. It has been confirmed to work on Windows 10. 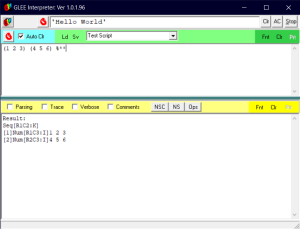