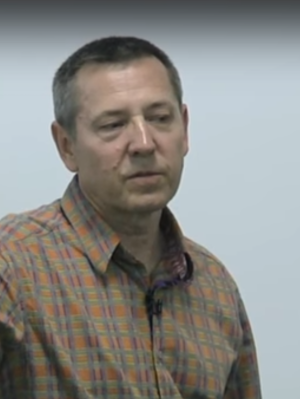 Morten John Kromberg is the current CTO, and former CXO, of Dyalog Ltd. Having a decade-long history as APL consultant, followed by years as CTO and developer at Adaytum (now Cognos), he is also an active member of Dyalog's team of APL developers, a prolific speaker at various events, and a frequent author on Dyalog's blog.[1]

In 1979, Kromberg met some people who were setting up an office for I.P. Sharp Associates (IPSA) in Oslo, Norway. There, he had unlimited access to APL timesharing. During the 1980's, he attempted multiple times to become an academic, repeatedly but repeatedly ended up in paid work, implementing databases, crew scheduling systems and modelling North Sea oil production.

He met Gitte Christensen via the IPSA Mailbox (also written in APL, before the Internet) and moved to the IPSA Copenhagen, Denmark, office in 1984. Upon the birth of his son in 1985, he gave up the idea of getting a degree, and learned how to install and maintain SHARP APL applications on mainframe computers — working on this until IPSA was bought by Reuters — finally leaving to form Insight Systems together with Gitte Christensen and Kim Andreasen in 1990. For a while they combined SHARP APL work with work in APL*PLUS and Dyalog APL on PCs. 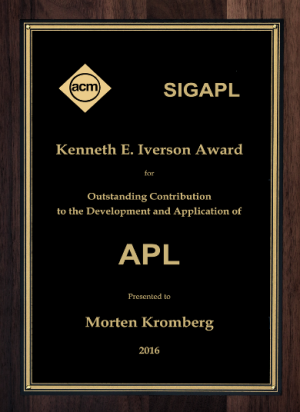 During a period with little billable work, Insight Systems implemented SQAPL (also known as APL Link Pro in the APL*PLUS community) which quickly became the de-facto standard ODBC interface within the APL community.

Around 1995, Insight Systems became part of Adaytum Software, and Kromberg became the new CTO. The Insight Systems division took over responsibility for the development of Adaytum Planning, a budgeting and performance measurement application which uses Dyalog APL at its core. The application was eventually sold to Cognos in 2002. In 2008, Cognos was bought by IBM which continues the marketing of the original Adaytum product.

Morten Kromberg became the CTO of Dyalog Ltd. in 2005 and has held the position since, except for 2015–June 2019 during which he served as CXO.[2] In 2016, Morten Kromberg and CEO Gitte Christensen received a joint Iverson Award for the substantial leaps forward in APL technology that have been made under their leadership.[3]

Kromberg has given a presentation on Dyalog's technical direction every year in his role as CTO or CXO, mirroring the opening statements by CEO Gitte Christensen.