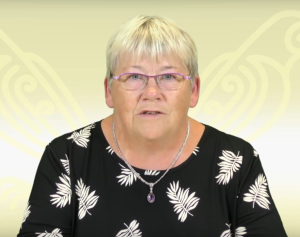 Anne-Birgitte Christensen discovered APL in 1983. Since then, she has worked as an APL programmer and consultant, headed development and sales of commercial software based on APL, and is currently the CEO of Dyalog Ltd.[1]

After graduating as a research biologist, she was offered 6 months of training in EDP (Electronic Data Processing). Afterwards, she had to do an internship, and was placed at I.P. Sharp Associates (IPSA), where she felt very much at home. When exposed to the implicit mapping of APL's scalar functions, she immediately fell in love and never looked back at Fortran.[2] 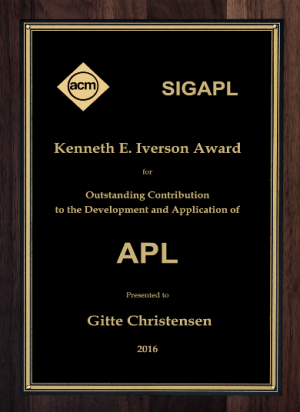 She met Morten Kromberg via the IPSA Mailbox (also written in APL, before the Internet), which (as opposed to today's email protocols) allowed looking up information mail addresses. Kromberg had written a little routine that would keep track of mail addresses that had recently been added or removed. When he noticed "a lady" had joined the Copenhagen, Denmark office, he immediately sent a message welcoming Christensen, and they started communicating via email and the then available )MESSAGE system command.[2]

After Kromberg visited Copenhagen for the second time, they became a couple,[2] and in 1990 they together formed Insight Systems where they combined SHARP APL work with work in APL*PLUS and Dyalog APL on PCs.

Backed by SimCorp and APL Italiana, Gitte Christensen became the CEO of Dyalog Ltd. in 2005 and has held the position since. In 2016, CEO Gitte Christensen and Morten Kromberg received a joint Iverson Award for the substantial leaps forward in APL technology that have been made under their leadership.[3]

Christensen has generally given an opening statements every year in her role as CEO, mirroring the technical direction presentation by CTO/CXO Morten Kromberg.