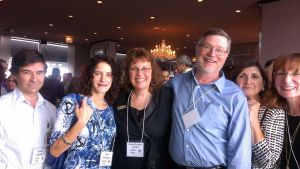 Baronet was responsible for Dyalog's Simple APL Library Toolkit (SALT) and its framework for user commands (affectionately known as spice), but also worked on many other APL tools through his company Milinta Inc, specialising in the development of free open-source tools to transfer of APL code between dialects.[1] He was a prolific writer and presented at many events.

Baronet was famous for innovative uses of APL primitives. He's credited with discovering that b⊥b or, as he preferred writing it, ⊥⍨b, counts the number of trailing ones in the Boolean vector b:[2]

For a base vector

and a digit vector

to the mixed base

Now, in a monadic context, ⍨ (Commute) causes the function to the left to be called with equal left and right arguments.

, the sum of all cumulative products from the right to the left.

For k trailing ones, the k rightmost products are 1 and all others are 0, so their sum is equal to k.[3]