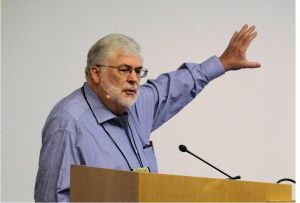 Robert "Boolean Bob" Asa Smith of Laurel, Maryland first encountered APL in 1969 while working for NSA. Devoted to studying and contributing to the language, he left for STSC two years later. At STSC, he was involved in the creation of NARS, and currently develops and maintains its successor, NARS2000, though his company, Sudley Place Software. He was the editor of the problem section in the APL Quote Quad, and regularly publishes and updates papers on various subjects of cutting edge APL.